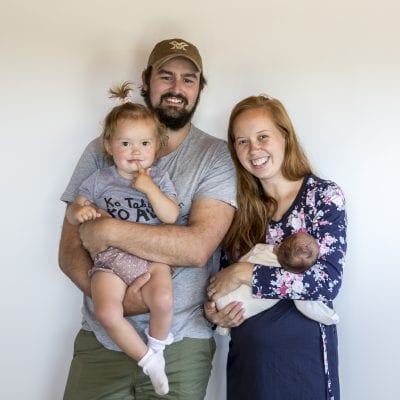 Toya McKenzie-Woodgate became a homeowner at age 22 in 2016 with the help of her Whai Rawa account. Through a combination of simple hard work, the help of Whai Rawa savings, and sheer good luck, she and husband Callum McKenzie have the kiwi dream wrapped up in a Leeston cottage. Toya has since become a mother to two pēpi and the couple are now renovating their Leeston home.

“I had had all my Whai Rawa withdrawal applications ready to go from December. The staff there really helped me calm down”, she said. “I wouldn’t have been able to afford to buy a house without that extra amount there, and the bank probably wouldn’t have supported us as much financially either.”

When Whai Rawa was created 10 years ago, Toya’s mum was an employee at Te Rūnanga o Ngāi Tahu, and signed her entire whānau up. At 17, Toya began working casually for the iwi office herself and learned the value of the saving scheme up close while processing administration for the unit.

She graduated in 2015 from the Canterbury College of Education with First Class Honours in a Bachelor of Teaching and Learning and taught at Hoon Hay Primary School. With two full-time incomes, Toya and Callum felt they could start looking at home ownership.

In December 2015, the couple began looking around at viable first home options. They were astounded at the competitiveness of the real estate market and were quickly forced to look outside of Christchurch. Five months later, the Selwyn district became their hunting ground and after several false starts, with frustration mounting, the pair resorted to Trade Me browsing. Within minutes, they found a house that ticked the boxes, arranged a viewing and put down an offer within five minutes of setting foot inside the door.

Although “stressed out” by the purchase, with support from Callum, her whānau and the Whai Rawa team, Toya was able to use her account balance as part of the settlement deposit on the Leeston property in July 2016. After seven months of almost-continual house hunting, the paperwork and the relationship with the Whai Rawa contact centre was solid.

“I had had all my Whai Rawa withdrawal applications ready to go from December. The staff there really helped me calm down”, she said. “I wouldn’t have been able to afford to buy a house without that extra amount there, and the bank probably wouldn’t have supported us as much financially either.”

In 2020, Whai Rawa caught up again with Toya and Callum at their Leeston Home. Since buying their home, they have become parents to two daughters, Lillian, 1 years old, and their newborn, Adaline. Toya has set up a Whai Rawa account for Lillian and Adaline to ensure they too can achieve their life goals one day. Signing her pēpi up before they are one means they will receive their $100 newborn distribution from Te Rūnanga o Ngāi Tahu, giving them an amazing head start for their investment journeys.

Now with a bigger whānau – two tamariki and three kurī (dogs), the couple are renovating their whare to really make it their own and set up for their future.